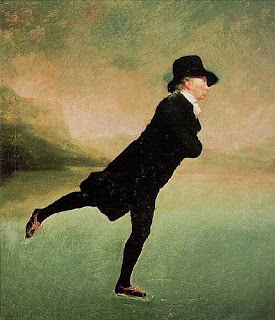 Ice is flat. Or rather, to be pedantic, ice forms a surface parallel to the geoid, an approximate sphere roughly 13,000 kilometers in diameter.  This is true of both ice on rivers and lakes, and also ice in ice rinks.

Making an ice rink is fairly straightforward.  You construct a shallow dish and lay plastic pipes across the bottom.  You fill the dish a few centimeters deep with water, then pump refrigerant through the pipes.

Skateboard parks, in contrast, are anything but flat.  This allows skateboarders the freedom to play with the interchange between their kinetic and potential energy, with - in competent hands (or rather, feet) - spectacular results and  broken bones. 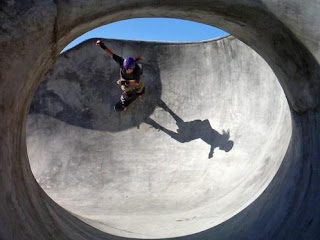 Skateboard parks are made by pouring concrete into formers and letting it set.

But you could do just the same thing with ice.  The formers could contain the refrigerant pipes.  You would fill them with water, not concrete, then turn on the refrigerator.

The result would be like a skateboard park, but for people wearing ice skates.

Posted by Adrian Bowyer at 09:54 No comments: 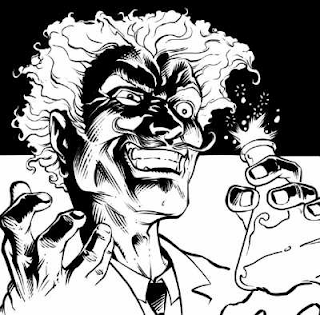 Pharmaceutical companies spend a lot of their time, and ill people's money, patenting medicines.  They then have a legal monopoly on those medicines, which allows them to charge a great deal for them.  For example the anti-cancer drug trastuzumab (Herceptin) costs about €30,000 per year for one breast cancer patient.

Trastuzumab is a monoclonal antibody, so it is not as easy to make as making carbon dioxide by adding sulphuric acid to chalk, but it isn't that hard either.  You fuse cancer cells and spleen cells in a mouse that has been injected with whatever substance that you want the monoclonal antibodies to bind to.  In the case of trastuzumab, that's human epidermal growth factor receptor 2, which is a protein that makes breast cancers grow.  (In that particular case, you also can't use ordinary mouse cells as people react to mouse proteins, you have to use cells that make the human version.) Finally, you clone the cells to increase their number then use them to make the antibody.

These days all this sort of messing about is done by robots with pipettes, not by the pharmaceutical company employee above with the conical flask.

How much would such a robot cost? I build robots all the time, and I estimate that such a robot might - if mass produced - cost a couple of thousand Euros at most.

Here patent law (in Europe, not America) gets interesting: any private individual can make any patented object for their own use without infringing the patent.  They can't sell it, but they can, for example, eat it or inject it.

This means that national health services could loan patients a drug-synthesizing robot that cost less than a few-months supply of some drugs.  The patients could make their own drugs and thereby treat their disease with the latest medicines.

The health services would save a fortune.
Posted by Adrian Bowyer at 20:58 No comments: 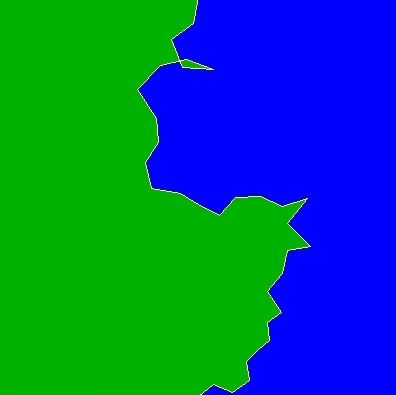 One standard way to make a fractal curve is to take a straight line, cut it in half, and move its mid-point a random amount. You then do the same with the two halves, but move their midpoints by a smaller random amount. If you keep going you end up after a few times with something like the picture above.

This is a way to generate artificial coastlines. If you do it with a triangle instead of a line and move the midpoints of its edges out of the plane of the triangle, you make an artificial fractal landscape (shown here flooded): 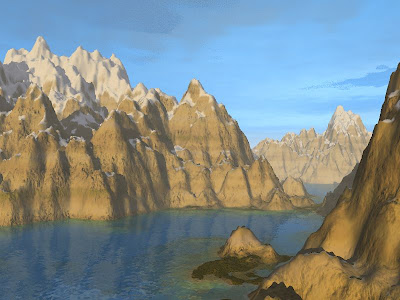 Here's a new way to do this sort of thing.

Take a box (blue) with a single diagonal line in it (black). Split the line in half and move it as far as you can without a disc on the split-point hitting anything. You get this: Then repeat this on the two halves, with the exclusion disc reducing in radius at each stage and being imagined to be on every vertex of the curve: 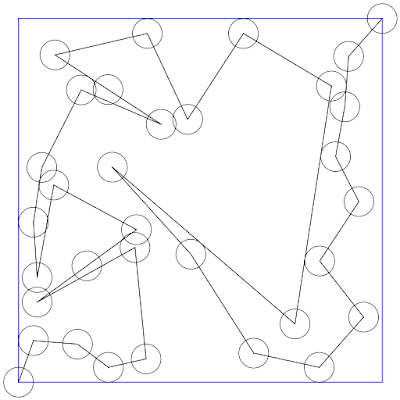 That's it after six steps. Note that, although it looks random, it is entirely deterministic and its shape is set by that simple rule: split, and move as far as you can without the straight lines overlapping the discs. 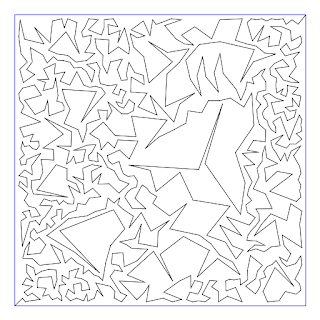 Here it is after splitting ten times.

If you start with the four edges of a square (filled in red here so you can see what happens): 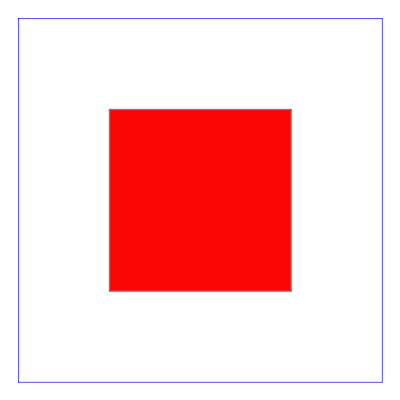 And let it run you get this: 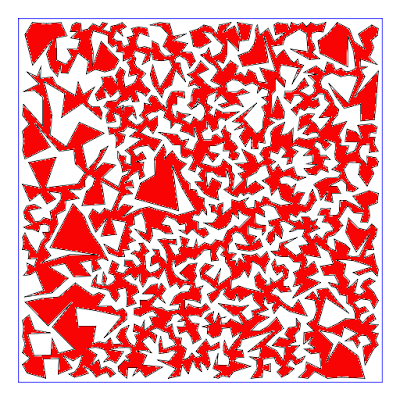 For more on this idea see here.
Posted by Adrian Bowyer at 22:27 No comments: 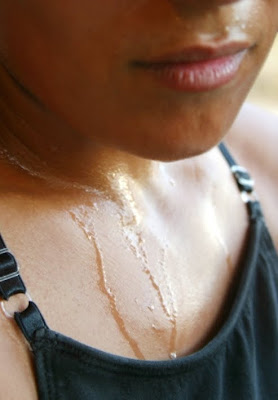 Sweating is an elegantly efficient mechanism that takes advantage of the fact that our most readily available liquid - water - carries an exceptionally large quantity of energy away when it evaporates. The enthalpy of vaporization of water is 2257 kilojoules per kilogram. This means that if you are exercising at 500 watts for half an hour (which is a good aerobic workout) you only need to evaporate 400 grams of sweat to carry away all the heat you generate. That's one large glass of water.

In practice, it works even better than that because you also lose heat by radiation and convection as well. But just because something marvelous has evolved, it doesn't mean that we can't improve on it.

As anyone caught in a rainstorm in light clothing knows, a wet shirt is very cold indeed, especially when the wind blows. It is sweating for you when you don't need it to.

We also deliberately get our clothes wet once each time we wear them: we wash them afterwards.

Poly-(N-IsoPropyl-AcrylAmide) is hydrophobic above 37oC and hydrophilic below 32oC. This means that at low temperatures it holds onto water, and at high temperatures it expels it. There are other materials with similar properties.

Suppose we were to make clothing incorporating these materials? If we were to wash them on a warm wash, they would absorb some of the final rinse water and then retain it when cold, feeling dry to the touch. But when we exercised in them, or simply found ourselves in the warm sun, they would start to give up their stored water.

Our clothing would keep us warm and dry when it was cold, then sweat for us when it was hot.
Posted by Adrian Bowyer at 09:54 No comments: 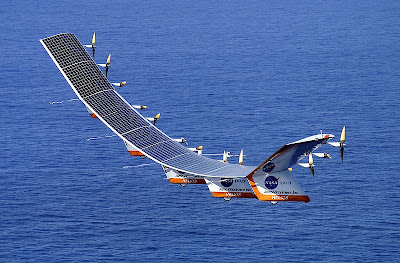 Most electric aeroplanes tend to look like this. Make no mistake, the achievements of electric aero researchers are impressive. But the results always tend to look a bit fiddly and - both more importantly and more understandably - lightweight.

That example (Helios) is solar powered. Sunlight has a density of about 1 Kw per square meter, and conversion efficiencies don't get much above 30%. This means that you don't have a lot of power to spare, given a reasonable wing area. That is why the plane looks like it does.

The obvious solution - replace the sun with batteries - stumbles because batteries don't give a lot of power either. Worse, they are heavy. 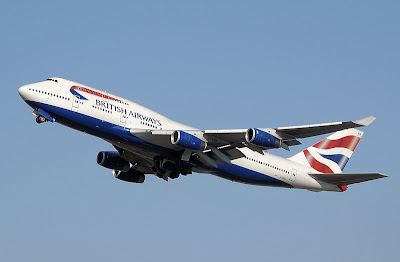 However, the battery in your car is 100-year-old technology. The specific energy of batteries has been increasing, and increasing more rapidly in recent years. The best we have today (lithium ion nanowire) gives about 2.5 megajoules per kilogram.

And batteries don't have to get to the energy density of oil to compete in aircraft propulsion. This is because electric motors are much more efficient than gas turbines. Typically, you can't get more than about 40% out of a gas turbine, but you can easily get 80% from an electric motor.

So when batteries get to ten times the energy density of the best now, it will start to make sense to power aircraft with them. And with the rate of progress in battery development that will probably take less time than most would imagine.

But there is a research gap. As far as I can find out, no one is trying to develop an electric aircraft turbine for passenger aircraft. Given the lead times for this sort of technology, this seems short-sighted to me. We are in danger of having the batteries for planes, and then having to take ten years to make engines to go with them. Engine development doesn't need to have the batteries available, as all the testing can be done on the ground.

A final point. At half the energy consumption of an equivalent gas turbine, an electric turbine will generate half the heat. This will have to be got rid of in the airflow, where it can be put to good use expanding the air and generating extra thrust.
Posted by Adrian Bowyer at 10:49 No comments: