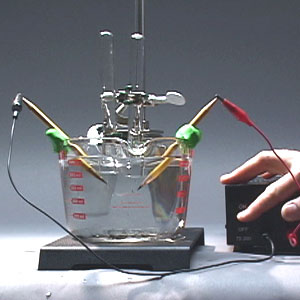 So you have some photovoltaic cells to generate electricity, and you have a bottle to store hydrogen.  You can now make the hydrogen by electrolysis, and so save the solar energy for use after dark, or in a different location.

But you need water to electrolyse.  In most places that isn't a problem.  But in deserts, or if you need to make a closed fully-independent system, what would be useful would be an automatic way of extracting the water you need from the atmosphere.

As anyone who has ever inadvertently left a few crystals of sodium hydroxide on a lab bench knows, deliquescence is an intriguing phenomenon.  Many soluble substances (like NaOH) have such a strong affinity for water that they will drag it out of the air and dissolve themselves in it, forming - in the case of the crystals - little droplets on the bench that it is unwise accidentally to lean on.

It ought to be possible to make a deliquescent solution that is also electrolytically appropriate for the production of hydrogen.  Along with the PV cells, this would take sunlight and make a stream of hydrogen from it continuously, extracting water from the atmosphere to replenish itself.  Having no moving parts, it should work forever, with no need for topping up and no need for maintenance.

Mass-produced generators would become possible that could simply be left in sunny places to produce hydrogen for ever...

Posted by Adrian Bowyer at 15:25 No comments: 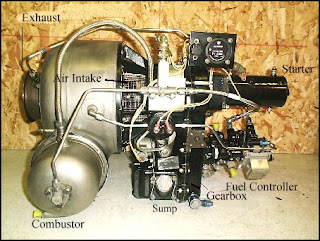 Hybrid cars are a sort of half-way house between old-fashioned twentieth-century petrol cars, and proper electric cars with batteries.

We can't quite have the latter, of course, because the batteries aren't up to it yet (see my post on electric aeroplanes of a few weeks ago).

All the hybrid cars I have seen, though, use a conventional reciprocating engine to drive their alternators.   This is very silly - reciprocating engines are inefficient and unreliable.  They have one single advantage: they respond rapidly when you blip the throttle.  You need that if they are directly connected to the power-train, as in the old-fashioned cars I just mentioned.  But that advantage is completely pointless in a hybrid, in which the battery accommodates sudden changes in load.  For a hybrid you need a simple reliable engine that runs at constant speed and more-or-less constant power.

The picture is of a Garrett GTP 30-67 gas turbine.  It's about half a meter long and generates about 25 Kw of power.  That sort of engine would be perfect for a hybrid car.

In buoyant economic times near-full employment comes about as a consequence of people flush with cash going out and spending it: someone has to make the jet-ski that they buy or the resort hotel in which they book a room.  And recessions are created by people hunkering down, sensibly hanging on to their money now that that rainy day has come, and thereby throwing the other people who would have been servicing their needs out of work.

Now, apart from buying lunch and a couple of commuter tickets, people actually at work are not spending a lot of the money that their work is earning for them.  The company for whom they are working may be spending as a result of their activities, but the amount available for the company to spend is comparatively low.  The total assets of the people who work for a company usually far exceed the assets of the company itself.

Almost all the money those people spend is spent during their free time.

As a consequence of all this I offer a five-word election manifesto to any political party that simultaneously wants to get elected and to improve its nation's economy.  It has such instant appeal to the electorate that it would guarantee an election win, regardless of how dismal the party's previous poll ratings were.

It is this: Add Friday to the Weekend.
Posted by Adrian Bowyer at 13:35 1 comment:

Artificial intelligence researchers are very fond of the idea of a Turing test: a computer program converses with a person who can't see their fellow interlocutor.  If the person cannot tell that they are talking to a computer, as opposed to another person, then the program must be intelligent.  (Or at least as intelligent as the person's friends...)

Turing's brilliant proposal cuts the Gordian knot of defining what is or is not intelligent behaviour with subtle elegance:  if people can't tell that they are not talking to other people through the wall when they actually talk with the computer, then the computer must be at least as intelligent as people expect people to be.

Of course, no one has written a program that will pass the test yet.  But programmers often simplify things by restricting conversation to a narrow area, such as fashion, or physics.

Others try to write programs that do non-conversational intelligent things that people do: the world chess champion is now a computer program, and poker-bots attempt to fleece real people on online poker sites.

But how about a program to pass human intelligence tests?  These tests are highly structured, and so it should be relatively easy to write a program to interpret the input.  And they usually require a rather restricted range of pattern-matching skills to solve.  Finally, the score can be directly compared with that of the large groups of people who also take the tests.

It might be rather salutary if computer programs were to turn out to be both good at IQ tests and quite simple to write...
Posted by Adrian Bowyer at 00:56 No comments: