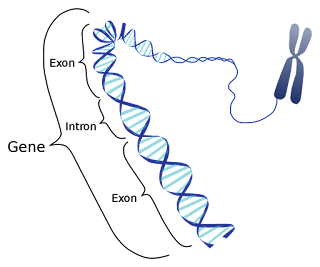 Note: there may be some flaw in the logic of this argument.  Or, alternatively, it may be an established result in genetics that my (brief...) researches have failed to find.  If either, tell me in the comments and I will amend as necessary. But if neither, I present it as a possible explanation of an important phenomenon.


There is a meta-analysis in Nature Genetics on 14,558,903 (!) partly dependent twin pairs that shows that the heritibility of a wide range of traits is 49%.  That is to say those phenotypical traits are 49% determined by a person's genes, and 51% by their environment.

This seemed rather close to 50% to me, and set me wondering if there is an evolutionarily stable strategy (ESS) at play that is forcing the figure to 50%.  The first such ESS that was discovered (by R.A. Fisher) is the one that gives a 50/50 sex ratio in a wide range of species.  An ESS doesn't have to settle at 50%; for example the ESS between hawks and doves in the human population (and many others) is heavily weighted towards the doves.

So.  The question to ask is, if you are a gene, in order to maximise your fitness how much of the phenotype you develop should you control, and how much influence should you hand over to the environment?  (Note importantly that "the environment" here includes all the other genes in the organism and any influence that they might have over that phenotype; and that those genes will be subject to the forces I am about to describe as well.)

Suppose you are a gene that controls everything about a fur-colour phenotype and you are a gene for green fur.  There is another, rival, genetic allele for brown fur.  In a verdant forest you, green-gene, will leave more offspring, and brown-gene will diminish in the population.  In contrast, in a brown-coloured savanah your brown-gene competitor will come to dominate.

Now suppose a mutation arises capable of causing either green or brown, and that switches the phenotype fur to green or brown depending on the colour of its surroundings when the organism of which it is a part is developing.  Clearly individuals posessing that new mutation will be able to colonise both the forest and the savanah, and the new gene will come to dominate (assuming the cost of its working is not greater than that of the other two).  This new gene has handed over some of the determination of its phenotype to the environment, and has thereby gained an advantage over its more dictatorial predecessors.

But a gene that has no influence at all over any phenotype, and which leaves the determination of the phenotypes to the environment (which includes the other genes, remember), has no fitness because it cannot influence its reproductive success.  It may get carried along for the reproductive ride as non-coding DNA, or it may just be eliminated altogether.

In our example, suppose the developing organism adopts the colour of the nearest object during its development, as opposed to switching between just green and brown.  And suppose it grows up in a nest surrounded by bright orange flowers.  Clearly, in this case, the gene will have given up too much control to the environment. 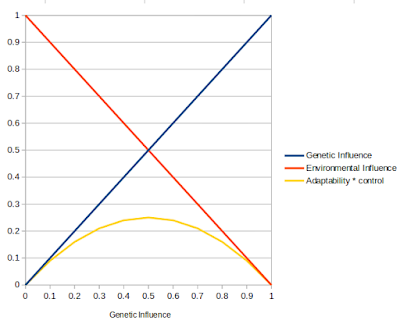 The X axis and the blue line are the proportion of the influence of the gene on the phenotype, which allows the gene to control things. The red line is one minus this - the proportion of the influence of the environment on the phenotype, which allows the phenotype to adapt to its surroundings in some way.  If we multiply those together, we get the yellow curve, which is the benefit the gene gets for a given proportion.  That is, the gene "wants" control, and it "wants" adaptability, but these are in opposition, so it can't have all of both; when one increases that increase necessarily drives the other one down. Unsurprisingly, given the symmetry of this example, the maximum - the most beneficial point for the gene - is at 50%, which is the figure we set out to explain.  But the symmetry seems a bit of a cheat.

So suppose we change the form of the blue line (and consequently the red one) so it is merely some (in general non-symmetrical) function, f, of the genetic proportion (call that g) along the horizontal axis.  As in the graph above for the simple case f(g) = g, the new general f(g) generates values in the interval [0, 1].  The yellow curve, the benefit the gene sees, B, is now:

(all other things being equal, the gene's fitness, ω, will be proportional to B).  The maximum value of B will be where dB/dg = 0:

So the watershed value of 50% for the maximum benefit to the gene doesn't change, regardless of the form of f(g).

There must, of course, be exceptions to this simple analysis.  But it does show how, for phenotypes that must adapt to their environment, the genes that control them would be expected to hand exactly 50% of their influence over the phenotype to that environment.

Posted by Adrian Bowyer at 15:43 No comments: