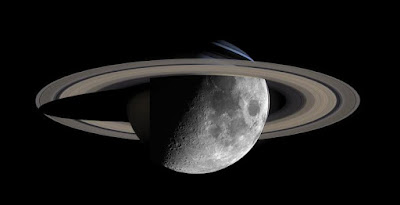 The Moon is all very well, and is quite pretty in its way.

But how about an installation consisting of a set of rings round it?

We'd need material for the rings, and we'd probably need to put some shepherd satellites in orbit to keep the rings sharp. This implies moving a few asteroids about, a skill that it may well be vital to have developed anyway if a rock looks to be heading our way.

The shepherd satellites would also be needed to keep the rings tilted relative to the plane of the ecliptic so they weren't edge-on. That way we'd get the full impressive effect.

We could rent out projection advertising space on them on a strictly one-day-a-month basis, that day being a new-moon day when they'd probably be at their least naturally spectacular. That should pay the bill, and leave 27 days each month for us to enjoy them...

Posted by Adrian Bowyer at 12:13 No comments:

SETI - the Search for Extra Terrestrial Intelligence - is rather like religion or catwalk fashion: all of them seem simultaneously both profound and profoundly silly.

The SETI crowd concentrate on scanning the sky for alien radio signals. To a certain extent this is a case of looking for your lost contact lens under the street-lamp, rather than in the shadows where you dropped it. This is because radio (and visible) electromagnetic radiation is what makes it all the way down through the atmosphere to us. What's more, the Earth radiates in the radio spectrum like a small star. Everybeing with a receiver in a sphere 200 light-years in diameter (and that's about 60,000 stars) will know that we are here, and will be uncomprehendingly trying to deduce the relationship between The Sopranos and Bugs Bunny.

If we were looking at us using radio, we would see us. But we would not be seen because we are trying to communicate beyond the Earth, but because of leakage from our inefficient broadcasting system. We can imagine that, with technical advances such as the one on which you are reading this, in but a few decades our skies will become silent again even as our communications become ever more feverish.

We have also sent a few deliberate transmissions, with clever clues as to how to decode them into pictures (the lengths of the sides were prime numbers). Of course, any intelligent listeners may have no concept of a picture. But - much more importantly - they will have to be listening in the right direction at the right time. Radio signals flash past at the speed of light. Blink, and you've missed them.

For a moment consider the matter from the perspective of the Things doing the transmitting. Like our prime-product-picture senders, they have something to say. What characteristics would their ideal transmission medium have? I contend that they are these:


In short, and in twenty-first century human terms, what a transmitting civilization needs to do is to drop - at the speed of light - a DVD of Wikipedia and a few Bach partitas down on every habitable planet; a DVD that will remain playable for hundreds of millions of years. The trouble is, of course, that it requires infinite energy to accelerate a DVD to the speed of light, and they don't last more than a few decades, let alone hundreds of millions of years.

But what about a bacterial spore with the message encoded in its junk DNA?

Again, it needs infinite energy to get it to the speed of light. But - with a mass of 10-15 Kg - it only requires 7x10-15 joules to get it to 99% of the speed of light. And that will convey it to its destination almost as quickly as a radio signal. It would have to be coated in something to protect it - probably a microscopic metal labyrinth from which it could escape, but which shielded it from every direction. This is because, when you move at 99% of the speed of light, ordinary starshine pours down your throat as hard gamma rays; it is Doppler shifted. The protection would raise the mass a bit, and hence the launch energy. And, of course, most spores would never make it.

However, those that found a convivial home would start to reproduce, spreading the message and copying it down the aeons. The message would become a little corrupted with time, and the bacteria would change through evolution. But by comparing the DNA from many of its descendants it ought to be possible to reconstruct the message.

Instead of looking to the skies, we should be examining junk bacterial DNA for the first hundred digits of the base-4 expansion of pi.

It's possible, given long enough, that the message itself might evolve into a species capable of understanding it. So maybe we should be looking at our own junk DNA too...
Posted by Adrian Bowyer at 15:35 No comments:

Holograms are extraordinary things. Just by using constructive and destructive interference, a two-dimensional photographic plate recreates the entire pattern of light in space bouncing off a three-dimensional object.

The diagram of the way they are made is a staple of every physics text book: 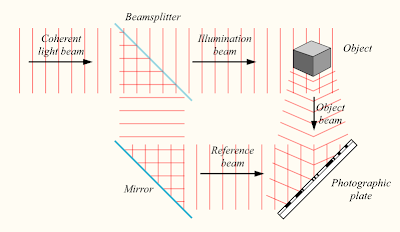 (That one is courtesy of Wikipedia.)

A hologram is a rather complicated diffraction grating. Imagine leaving the three-dimensional object out, changing the angles in the diagram a bit, and just recording the interference between the raw illumination and reference beams. When you do the interference sums (which for this case require no more than school trigonometry) you find that that interference pattern forms a - this time simple - diffraction grating. If you re-shine the reference beam at that grating, trigonometry again shows that the angle of the diffracted light that it gives off is just right to recreate the original unhindered illumination beam.

The hologram of the three dimensional object is just this process going on all over the place to recreate the much more complicated light pattern bouncing off the object.


For someone used to the Roman alphabet like me, walking round an Oriental city can be a confusing experience. You have to work out every sign by consciously and deliberately comparing bits of geometry. And heaven help you when the font changes. The same must also be the case for someone used to reading, say, kanji hiragana and katakana, when they find themselves in Europe or America.

What you would like to be able do is to buy a pair of glasses for a couple of dollars from a concession stand at Tokyo (or London) Airport with a British (or Japanese) flag printed on their cardboard mount. You put them on, and suddenly all the signs are in your own language.

(Image adapted from this original.)

One of the things that a hologram must recreate is light polarisation.

So - you start by making a sign for Ueno Station in Japanese that reflects polarised light in one orientation. Simply placing a sheet of polaroid in front of the sign should do the trick.

You half-expose the sign to create a white-light hologram. You then do the same for the sign in English with a different angle of polarisation and do the other half of the exposure. The result should be a sign that, when viewed through polaroid sunglasses with the appropriate angle, lets you read the sign in just Japanese or just English. The other language should be (almost) invisible. It may even be possible to do more than two languages at once, depending on how finely the polarisation angles can be distinguished.


Of course, it doesn't just work for station signs and street names. It should be possible to implement the whole scheme for free in any city, simply by insisting that advertisers who use the technique also pay for some of the public signs...
Posted by Adrian Bowyer at 10:42 1 comment: