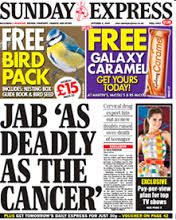 The very wonderful Ben Goldacre rightly has it in for (among others) journalists who misrepresent scientific research to generate a completely artificial scare story.  Think no further than the MMR scandal in journalism for example, in which newspapers killed many children.  (And in which one journalist, Brian Deer, exposed the original fraud.)

Often the problem is not the original paper describing the research, but the press release put out by the authors' institution (whose PR departments are usually staffed by more journalists).  Of course the authors are at fault here - the PR department will always give them a draft of any release to check, and they should be savage in removing anything that they think may cause distortions if reported.  But authors are not disinterested in fame and publicity.

It seems to me that there is a simple solution.  The normal sequence of events is this:


But simply by moving Item 6 to between Items 2 and 3 - that is by having the press release sent out with the paper to the journal's reviewers - a lot of trouble could be avoided.  The reviewers have no interest in getting fame and publicity (unlike the authors and their institution), but they are concerned with accuracy and truth.  If they were to correct the press release along with the paper itself, and in particular were compelled to add a list at the start of the press release on what the paper does and does not say in plain terms, then a lot of trouble could be avoided.

was nonsense.  In particular other journalists would know, and - of course - there's nothing one journalist loves more than being able to show that a second journalist is lying... 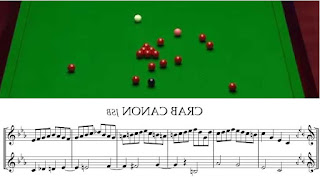 BBC Radio 3 has a competition in the mornings where they play an excerpt from a piece of music backwards and ask listeners to identify it.  Occasionally I get it and often I don't, but more interesting is the fact that music doesn't work backwards.  It just doesn't sound right, or even good.

This is rather surprising.  The rules of melody and harmony are like the laws of quantum mechanics - they are indifferent to the direction of time.

So if we watch (if we could) an atom absorbing a photon and one of its electrons consequently changing its energy, the reverse process whereby the atom emits a photon looks (if it could) just like a film being played backwards.  The same thing happens at the human scale - if you watch a film of two moving snooker balls bouncing off each other you can't tell if the film is being played backwards or forwards.  But if you watch a film of the first break in a snooker game, where the white strikes a triangle of reds, it is immediately obvious if the film is backwards or forwards.  For a load of red balls to converge and, after multiple collisions, to come to rest in a neat triangle whilst ejecting a white ball from their midst would be so monstrously improbable that we would know that that film was backwards more certainly than we know that we will not be eaten by a griffin.

A prog-rock cliché that is most effective is to start a piece with white noise (sometimes bandpass filtered to sound like the wind), or with random drum beats and cymbal clashes, and for all that gradually to resolve into a structured tune.  Think Pink Floyd.  And at the end of most musical pieces of all genres there is a resolution from dissonance to consonance, and similar resolutions are placed throughout because we find them pleasing.  So much so, indeed, that if a piece ends with a fade-out rather than a resolution we feel cheated and think that the players and composer (or merely the DJ) have been lazy.

A musical resolution is like all the snooker balls coming together improbably to form a triangle.  A high-entropy state has surprisingly turned into a low-entropy state - the very reverse of what we expect from our intuitive feeling for the Second Law.  The reason that backwards music sounds bad is because backwards music is like all of nature - its entropy increases.  But we like forwards music, and it sounds appealing to us, because it reverses the normal flow - it flows away from decay and dissipation towards freshness and refinement.