It is notoriously the case that nobody in Hollywood has a clue what they are doing.

Anyway.  From among the remainder, nobody can tell.

Perhaps it's time to take people out of the choice altogether.   I have written here before about stylometry: the battery of computational techniques used to compare the authorship of documents.  These techniques come up with a large number of statistics on a given document.  Comparing those statistics with the values from another document allows a probability to be assigned to the hypothesis that both were written by the same person.

But that's not all that one could do with such a large bunch of stats obtained from - in this case - a film script.  They could also be used as input to an artificial neural network.

Artificial neural networks are computer programs that learn to distinguish between sets of input parameters.  For example, you might want a computer program to examine CCTV footage from a road and automatically to flag up when there was a traffic jam on it.  In this case what you would do is to show the network lots of historical footage of the road when it was clear, and another lot of when it was jammed.  As the two sets of historical teaching footage have already been classified, the network can be taught to distinguish the two and to flag up one of two outputs: clear or jammed.

The stylometric measures from movie scripts are just as good a potential input to a neural network.  Hollywood has hundreds of thousands of old scripts, and of course it knows the blockbuster or turkey status of each.  You use those as the teaching input.  Once again the network has two outputs: produce this movie, or bin it.

Large numbers of expensive movie executives and their acolytes could be dismissed, and the whole problem of movie finance could be turned over to a PC.  When it lit up and rang its bell, a nearby secretary would pick up a phone and call a director from a list.  Job done.

Of course, this doesn't end with movies.  It would work just as well with TV scripts, and with novels.  Publishers would no longer have to flatter the pampered egos of their once-bestselling authors in the futile hope that they will be able to do the magic again.  All manuscripts, whether from the famous or the unknown, would go into the machine, and out would come a whittled-down but steady stream of copper-bottomed, sure-fire publishing sensations.

Posted by Adrian Bowyer at 22:16 No comments: 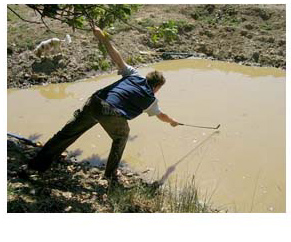 Golf balls are denser than water.  They are also quite expensive.  Golf clubs (I understand) make a decent side income from the balls golfers lose in their course's water traps.

But that means that they have to extract them.  There are all sorts of expensive machines that attempt to fish the things off the bottom.  Alternatively, some clubs leave fine nets over the bottom of the traps.  This makes recovery simple, but it disrupts the underwater flora.

A better solution would, I think, be to make a duck-food dispenser.  This would be designed to give out a few duck pellets whenever a golf ball was dropped into it.  The birds would soon learn to retrieve the balls from the bottoms of the water traps in which they swim every day, and then to drop them in the dispenser to get their supper.

Of course they might also be tempted to steal balls from the fairways...
Posted by Adrian Bowyer at 22:41 2 comments: 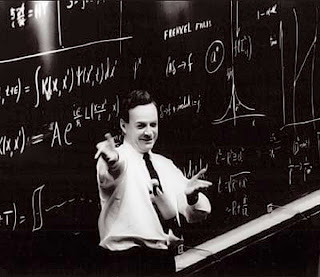 "I think I can safely say," said Richard Feynman, who understood everything, "that nobody understands quantum mechanics."

Quantum mechanics just doesn't gel in the human mind.  We can use the mathematical language of quantum mechanics simply enough, but it doesn't paint a picture in our heads.  Language only has meaning, according to Wittgenstein, to the extent that it paints a picture.  He later revised this principle (the principle itself has obvious meaning, but paints no picture), but for many physical explanations that picture is still essential.

And almost the whole of our technology depends upon quantum mechanics, in the form of electronics.  Just think what more we could achieve if we all found quantum mechanics as intuitive as we find Newtonian mechanics.

My modest proposal, therefore, is to teach quantum mechanics at primary school to everyone, starting sometime around the age of five.  Of course, not every child will get it.  But then not every child gets music, or poetry.  That doesn't stop us teaching those subjects.

But for many children the principles and ideas of quantum mechanics will sink into their subconsciouses, which will work their usual magic, making the ideas instinctive when some of those children, as adults, encounter them again.

Then we will have a whole generation the physicists and engineers who will both understand the mathematics of quantum mechanics, and also find that it chimes with their subconscious idea painter.
Posted by Adrian Bowyer at 22:22 1 comment: 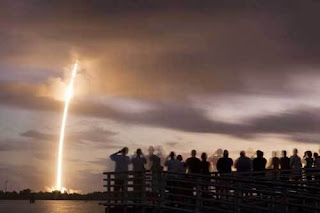 Liquid fuel rockets are good because you can turn the engines on, and - more importantly - off.

Solid fuel rockets are good because they are a lot simpler and cheaper, plus fuel storage is not a problem.

Liquid fuel has a higher specific impulse than solid fuel (typically 500 seconds rather than 250), but this is - in part - because of the necessarily inefficient design of a solid-fuel rocket: the entire rocket body is the combustion chamber.

Thermites (like copper oxide mixed with aluminium) would make lousy rocket fuels on their own.  They are very stable until you set fire to them, and they create a lot of heat, and both these are good.  But they give off very little gas, and so there is nothing actually to eject stuff out the back end of the rocket.  You just end up melting its casing.

But suppose you were to mix thermite with a binder?  That would decompose to gas to give an exhaust, and the exhaust would carry the metals from the thermite along with it out of the nozzle.  And, because copper has a high atomic weight, the exhaust gas velocity needed to carry a given momentum would be low and easy to control.   Lead oxide and aluminium should work even better in this regard, though it might not be a good idea to get downwind of the exhaust...

But we still haven't solved the control problems for a solid fuel rocket.  How do you turn it off, and then on again?

Instead of making the entire rocket body one solid lump of fuel, lighting it at the bottom end, and then running away as fast as your legs can carry you, why not wind a filament of rubberised solid fuel into a reel?

The reel would fill the entire body of the rocket, except for a liquid-fuel-sized engine at the bottom.  You would unwind the reel and feed the filament into the engine, where it would be ignited.  If you match the filament feed rate to the rate of burn, the thing would run steadily.  To shut the motor down, simply guillotine the filament then stop the feed.  To start it again, start the feed and re-ignite.

It ought even to be possible to arrange things so that, as the filament unwinds, the reel moves slowly inside the rocket body to keep its centre of gravity in the same place, making flight control much simpler and the rocket more stable.
Posted by Adrian Bowyer at 22:26 4 comments: