Occasionally one sees a freight train like this one on the London Tube.

If you want to move something smaller, like a parcel, quickly from an office in Fenchurch Street to one in the Fulham Road you give it to a bike messenger.  That person goes off at speed, makes a dent in a BMW bumper ("I didn't see you, mate."), gets sticky red stuff all over the BMW's windscreen, and fails to transfer the parcel.  This is not a very satisfactory solution to the delivery problem.

But it would be quite easy to design a QR-code-based system that allowed you to drop off your parcel at Aldgate station.  Your parcel would slide down a chute to the appropriate platform, having had its destination automatically scanned and having had your account appropriately debited.  There a robot would load it onto the next train (maybe on a parcel and letter rack between the passenger carriages).

At each station the robots would be loading and unloading packages, and swapping them by conveyor to different lines automatically.

When your parcel reached Fulham Broadway that station's robot would unload it and send it on a conveyor out to a collection point on the street.  Its recipient would get a text to say their parcel was ready, whereupon they would stroll to the station, wave their phone at the collection point, and be given their parcel.

The whole system would be fast and fully automatic, and it would make extra income for Transport for London. It would also reduce the need for BMW drivers to keep cleaning their windscreens.

Google Street View lets you go anyplace on Earth that Google's cameras have previously visited (which is pretty much everywhere) and explore that place interactively as a 3D virtual world.  Sometimes the pictures are a bit out of date, but the system is still both interesting and useful.

In one way, however, the pictures are not out of date enough.

There are now many complete 3D computer models of cities as they were in different historical eras.  The picture above, for example, is a still from a video fly-through of a model of seventeenth century London created by De Montfort University.  But a directed video fly-through is not the same as a virtual world that you can explore interactively.

So why not integrate these models with Street View?  You could have an extra slider on the screen that would allow you to wind back to any point in history and walk round your location at that date.  There would be gaps, of course, which could be filled in as more models became available.  And also some of the buildings and other features would be conjecture (the De Montfort model is accurate as far as the known information is concerned, but it is set before the Great Fire so there are interpolations).  As long as these were flagged as such there would be no danger of confusion.  Street View does allow you to go back through Google's scanned archive, but in the seventeenth century they were quite a small company without the resources needed to do the scanning.

On your 'phone, the historical data could be superimposed on the modern world in augmented reality as you walked in it, Pokémon Go style, giving you details of superseded historical architecture in your current location.

And when there were enough data we could train a neural network to predict the likely buildings at a given location on a given date from the buildings preceding them in history.  Running that on the contemporary Street View would give us an idea of what our cities might look like in the future... 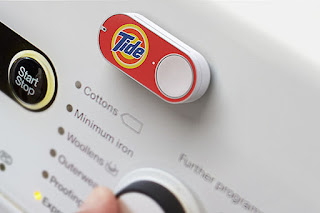 Amazon now have their Dash button that allows you to buy a restricted range of goods from, surprise - Amazon - when something runs out.  So you put the button on your washing machine, press it when the powder gets low, the button automatically does a buy-with-one-click using your home wifi, and a new pack arrives a day later.

But you can't set the buttons up to buy anything you like from Amazon, let alone from other suppliers.  The button locks you in to products that may well not be the best deal, nor exactly what you want.

Clearly what's needed is a user-programmable button that you can set up to take any online action that you preset into it.  Thus pressing the button might indeed do an Amazon one-click, or it might add an item to your Tesco online order, or it might boost your web-controlled central heating in the room where you are sitting, or it might just tweet that you are having your breakfast (if you feel that the world needs to know that on a daily basis).

Electronically, such a device would be straightforward.  And - as a marketing opportunity - it is potentially huge.  It would allow people total control over what they buy and from whom, completely subsuming Amazon Dash within itself among a much wider range of possibilities.  And in addition it could be used to carry out a vast range of non-buying online actions that are amenable to your pressing a button when you feel like it.

If I can find a spare afternoon, I might just design it and open-source the results...
Posted by Adrian Bowyer at 10:49 2 comments: 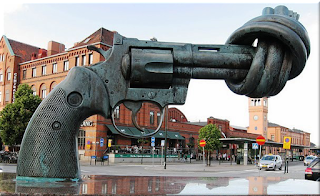 Steven Pinker's famous book The Better Angels of our Nature posits four reasons for the decline in violence that has happened and is happening in the world: empathy, self-control, our moral sense, and reason.  He explicitly (though only partially) rejects the idea that we are evolving to become more peaceful.

I am not sure (particularly given meme as well as gene copying) that evolution can be discounted as an explanation for the decline in violence.


What this says in English is that when two hawks meet they fight and each loses 1 unit of utility (the -1s top left) because of energy wastage, injury or death.   When a hawk meets a dove the hawk gains +0.5 units of utility because the hawk can easily steal from the dove (the +0.5 top right) and the dove loses 0.5 (the -0.5).  When a dove meets a hawk the reverse happens (bottom left).  And when two doves meet they each gain 0.25 units because they don't fight and can cooperate (bottom right). 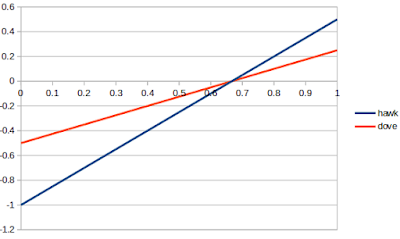 (I have chosen numbers that make the Nash equilibrium occur at zero utility for simplicity; this is not necessary for the argument that follows.)

Note very carefully that better weapons is not the same thing as more weapons.  The number of weapons always goes as the proportion of hawks (33% above) and is an output from, not an input to, the model.

With better weapons, when a dove meets a dove nothing is different because they didn't fight before and they don't now.  When a hawk meets a dove the hawk gets the same profit as before because the dove surrendered all that it had before.  So the numbers in the right hand column stay the same except for...

When a dove meets a hawk the dove may lose more (maybe it dies instead of merely being injured: the -0.75s). And when a hawk meets a hawk both lose disastrously because their better weapons mean greater injury and more death (the -1.5s).  So the numbers in the left hand column get more negative:

and the utility graph changes: 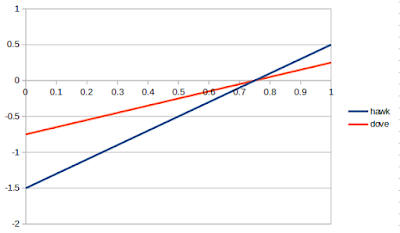 Now the population is stable when there are fewer hawks (25%) - and thus also fewer weapons - and more doves (75%).

Making weapons better at killing gives a society with fewer of them; a society that is more peaceful.
Posted by Adrian Bowyer at 15:48 No comments: 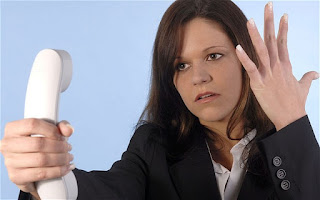 It is quite entertaining to listen in when my daughter (who's not the woman in the photo above) gets a scam telephone call.  She sets herself two targets:
So far she has failed on Target 2, but she does manage to keep some of them doggedly attempting to return to their scripts after she has led them up garden paths after wild geese and red herrings for a long time.

But the problem is that all this wastes her time too.

Chatterbots have been around since I was programming computers by punching little holes in rectangles of cardboard.   The first was Weizenbaum's ELIZA psychiatrist.  That mimicked a non-directive therapist.  It was completely brainless, but so strong is the human impulse to ascribe active agency to anything that talks to us, it was both interesting and fairly convincing to have a typed conversation with.

And these days chatterbots are much more sophisticated.  With near real-time speech recognition, voice synthesis that sounds like a proper human, and recursive sentence writers that never make a grammatical mistake, they can just about hold a real 'phone conversation.   Just listen to the second recording here - the appropriate laughter from the robot is stunning.

So how about a 'phone app that you tap when you get a scam call?  This app takes over the conversation, wasting the scammer's time for as long as possible and allowing you to get on with your life.

But it needn't end there.  The app could transcribe the entire scam conversation and upload it.  This would automatically compile a reference collection of scammer's scripts that anyone could google while they had someone on the line that they were suspicious of.  Also the app could evolve: conversational gambits that led to longer calls could be strengthened and new weights could be incorporated in upgrades so the app would get better and better at hanging the hapless scammer on the line.  Finally, the app could take the record of the things that the scammers themselves say and add variations on that to its repertoire of responses.

Already there are online lists of source numbers for scammers (though most disguise their origins, of course).  When the app found that your 'phone's account was coming to the end of the month and that you had unused free minutes it could dial up those scammer numbers at three in the morning and see how many crook's credit card and bank details it could gather and post online...

Posted by Adrian Bowyer at 14:49 No comments: