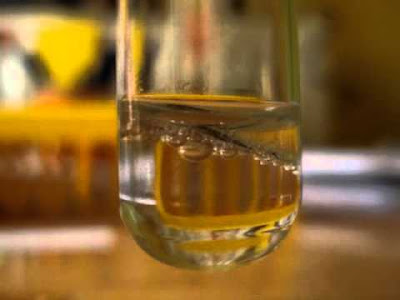 But now the US Army Aberdeen Proving Ground Research Laboratory has made a serendipitous discovery: they have found an aluminium alloy to which the film of oxide does not adhere, and so you can drop it into water and it generates hydrogen gas and aluminium oxide continually.

This is potentially an extremely important discovery.  The big problem with electric power is not generating electricity - we have hundreds of ways to do that, including many renewable techniques. The big problem is storage.  Even the very best and latest batteries are very expensive, very complicated, and store little energy for their weight.

But aluminium is made from aluminium oxide by electricity, and chunks of aluminium are cheap, and are easy and safe to store and to transport.  And we have fuel-cells that will make electricity from hydrogen.

So. How about an aluminium-fuelled car?  Let's compare it with the most efficient (but very polluting) conventional cars currently on the road - diesels - and also with zero-emission Li-ion battery cars, like the Tesla.  Here's the maths:

First, how much hydrogen do we get from one kilogram of aluminium?

Combining a ninth of a kilogram of hydrogen with oxygen from the air (which is what a fuel cell does) gives 15.5 mega-joules (MJ) of energy.  But fuel cells are about 50% efficient and electric motors are about 80%, so that becomes about 6 MJ of energy going to the car's wheels.

Diesel oil and aluminium pellets are both just simple, tough, cheap stuff; whereas Li-ion batteries are complicated, fragile, and expensive manufactured items.  It's easy to pour diesel into a car, or to drop aluminium powder or pellets into a hopper.  Batteries are time consuming to charge.  And a car carrying aluminium and water is inherently very safe in a crash compared to one with a tank of diesel in the back, and probably better than one with batteries (because of the very high mass of the batteries; lithium fires do happen, but there's actually not a lot of lithium in a lithium battery and it's not in its elemental form).

It looks as if our aluminium-powered car might be a GO.  That assumes, of course, that the US Army's research will scale and work reliably.

The car would be zero-emissions.  Its waste product would be aluminium oxide powder as a sort of ash.  This could be dumped at the refuelling station for re-smelting into aluminium.

And here is a potential problem.  Making one kilogram of aluminium from its bauxite ore (also aluminium oxide) takes about 48 MJ of electricity.  That would probably reduce a bit for recycling the car's ash, because that would be very pure.  Let's say 45 MJ, and assume we're going to be sensible and use renewable electricity like solar.  So the overall thermodynamic efficiency including the power generation (the so called wheel-to-wheel efficiency) of the aluminium-powered car is 6MJ÷45MJ, which is 13%.  The equivalent figure for a diesel car is around 14%, but for a battery electric car it's around 30%.

Note that all this analysis does not take account of the extra energy required to accelerate the considerable mass of the batteries in a battery car, some of which is recovered by regenerative braking.

In conclusion, the aluminium-powered car (if it works) would be a zero-emission vehicle that is as energy efficient as a diesel, but only half as efficient as a battery car.   It would be cheap to make (probably even cheaper in bulk than the diesel, and certainly cheaper than cars with lots of batteries). It would be the safest car on the road, and it would be quick to re-fuel (and ash-dump).

Aluminium as an electricity storage system probably makes sense for vehicles, at least until batteries get a lot better.  But its lower efficiency means it will not make sense for static storage, where mass does not matter.

But the really interesting possibility would be an aluminium-powered aeroplane.  An electric turbine would be more efficient (maybe 80%) than the turbofans that aeroplanes currently use (manufacturers are coy, but I guess around 40%), which would help to compensate for the 2.5:1 ratio of energy per kilogram we saw above between hydrocarbons and aluminium.  So we could have a zero-emission fleet of passenger aircraft, with no fuel fires in crashes.  The only problem is that the plane gets heavier and heavier as it uses up its fuel - aluminium oxide weighs more than aluminium...