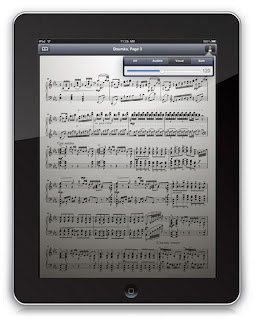 A while ago my brother put on some music after dinner.  "Who?" he asked me.

Of course it was terrible musical snobbery for us both to know implicitly that he was asking for the performer and not the composer (Chopin, as it happened).  And his subsequent question made me laugh for a long time.  Perhaps we had drunk too much wine.

But every musician needs a page turner, or there is that annoying half-second pause as one hand flies from the keys to flip.

There are, of course, page turner apps.  But as far as I can see they all rely on foot pedals.

However tablets have microphones.  It can't be hard to write a program that analyses the sound stream, matches it to a score, and then turns the page automatically... 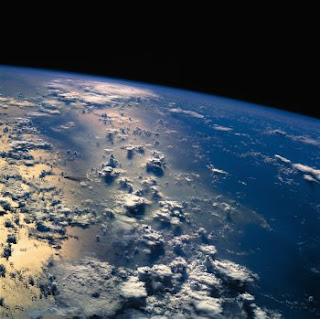 Dawkins' extremely strong counterargument against Gaia is that natural selection works at the level of the gene, and that it doesn't have any foresight to anticipate long-term planetary disaster in the face of an immediate pressure to select for a locally advantageous mutation.  As a counterexample to Gaia, there are the cyanobacteria.  They all but destroyed the Earth's entire ecosystem just after it first got started by dumping billions of tonnes of poison waste (oxygen) into the atmosphere.  And, of course, one counterexample is enough to disprove a hypothesis.

However, most of the evidence we have seems to support Lovelock.  For example, the sun has been getting steadily hotter, and yet conditions on Earth have been maintained more or less homoeostatically by the collective undirected actions of all its living organisms.  Lovelock simulated a self-regulating world of light and dark daisies (called, naturally, Daisyworld) that exhibited self-regulating temperature even though the participating organisms were only acting in their immediate self interest.  But this did not include a mutation that had an active interest in disrupting the homeostasis - something that is always a possibility in reality.

When he was working for NASA, Lovelock pointed out that a good indicator of life on another world would be (as it is on Earth) a surprisingly low-entropy state on its surface.  As an example, consider the oxygen again - oxygen is a highly reactive gas (hence its toxicity to primordial life); one would not expect unaided geological processes to create such a low-entropy atmosphere.  If we ever find an exoplanet with an ocean of molten sodium on its surface, we can be tolerably confident that that planet supports life.

One thing that all life needs is low-entropy.  You eat bread, which has a low entropy, and your subsequent living actions dump the energy in your bread as waste heat, which has high entropy.  In that way you, and all other living organisms, are behaving just like the steam engines of the nineteenth century which led thermodynamicists to the idea of entropy in the first place.  And when you plant a field of wheat for bread, you are contriving symbiotically with the wheat to use the Sun's energy locally to reduce the entropy of a part of the system.

Indeed, it is in the interest of all living organisms to have low-entropy surroundings.  That makes their life most easy to conduct (it is more-or-less equivalent to saying that they need a plentiful local source of food, clean water, and breathing air), and genes that cause them to create such a state in their local surroundings will - all other things being equal - be favoured.  Ants grow fungus farms for food.  Plants encourage symbiotic micro-organisms around their roots.  Spiders make larders in their webs.

But - as we established above - there is a selection pressure on every living organism to reduce the entropy of its surroundings.  Genes will have been selected in all living things to cause them to try to create local extended phenotypes of such surroundings.  None of this is global; no organisms (not even we) have evolved to stabilise the planet.  But the collective effect of all the local attempts to reduce entropy is exactly the Gaia that Lovelock proposed.  It is not a globally directed effort by each individual (let alone each individual gene), any more than a water molecule in a steam engine is trying to make a flywheel go round.  But the collective unconscious action of all the water molecules is, nonetheless, to achieve precisely that.  And the collective unconscious action of all organisms is to create a global low-entropy environment.

Dawkins would correctly argue (I think) that given global low entropy created by Gaia then there is a selection pressure on organisms to exploit that as a whole, thus destroying it in a tragedy of the commons.  And that is precisely what the cyanobacteria did.

So the question that remains is: why are cyanobacteria events so rare?  The answer is Dawkins' own Mount Improbable.  An organism that mutates to exploit low entropy in general must do so locally at first by a small mutation.  And almost all those organisms suffer the usual fate of over-successful predators: they eat too much of their immediate surroundings and then starve.  For random change to generate a mutation that allows excessive exploitation on a global scale in a single shot is an astronomically improbable event.  But it happened once with the cyanobacteria.  However, they didn't quite destroy everything, because they had a direct line to the Sun itself, and so they could survive the disaster they created.  Any organism without such a get-out-of-jail-free card would succumb to the predator starvation effect, and so leave pockets of other life (along perhaps with themselves) to start evolving afresh in balanced competition.

So Gaia is not a globally-directed system with a homeostatic purpose.  It emerges naturally as the result of all living things trying to reduce the entropy of their immediate surroundings using the power of the sun for their own benefit.  And Gaia is not proof against global cataclysm, nor against very very rare mutations that allow a single organism to exploit the system as a whole and thus destroy it.

For the first time in two billion years such a new species has emerged.  It also has a direct line to the Sun that is far more efficient (20%) than photosynthesis (3%).  It is the species who's extended phenotype includes making these out of the bare earth... 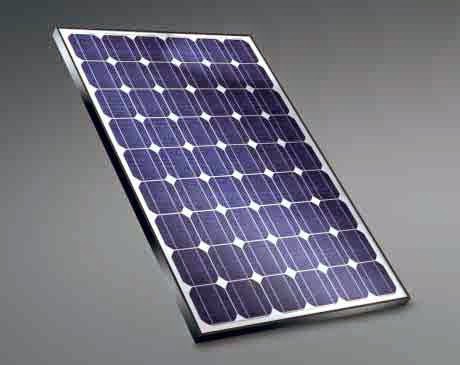