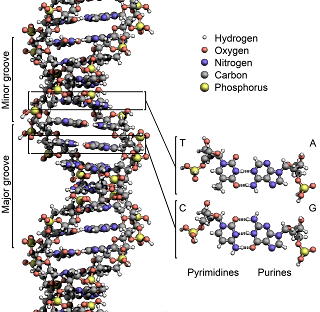 DNA was famously discovered in 1869 by Friedrich Miescher, just ten years after Darwin published the Origin of Species.  But it wasn't until 1952 that it was demonstrated to be the the key to heredity (in the T2 phage), and then its structure and modus operandi were deduced a year later.

In retrospect, its helical structure might have been anticipated (easy for me to say with hindsight, of course...).  If you take any random shape and stack repeated copies of it, the result is a helix.  The reason is that the top face of the shape will be a fixed distance from the bottom, and at a fixed angle to it.  Repeatedly copying something through a fixed distance and turning it through a fixed angle always gives a helix.

However, that helix must be very inconvenient for cells, as anyone who has had to deal with a tangle of string knows.  As DNA is copied it unzips down the middle then zips itself back up again a bit downstream.  Meanwhile the copy twists away forming a new chain.  My late colleague Bill Whish once worked out that the molecule has to spin at 8,000 RPM while it is doing this to get the job done in time.  Think of your car engine spinning at that speed and spewing out a twisted strip as it did so.  Now present yourself with the problem of stopping that strip from getting hopelessly knotted up, and also not tangled with its parent DNA.  It's fortunate that all this is happening in an extremely viscous medium - water.  At the molecular scale water is like very thick treacle indeed.  Our intuition from the engine and strip analogy is led astray by our instinct for flexibility, mass and inertia at human scales.  Down with the DNA inertia is negligible, and everything stays where it is put.

But what if DNA were not a helix, but were as straight as a ladder?  Many of these problems would go away.  It should not be too difficult to devise a molecular ladder where that angle between one rung and the next has zero twist.  If in no other way, it could be achieved by taking a twist and bonding it to its other stereo-isomer with the opposite twist to form a single rung.

The ribosome would have to be re-engineered to accommodate straight, rather than twisted, transfer RNA.  But people have already made artificial ribosomes that do things like working with four-base codons (all natural ribosomes work with three-base codons) so that should not be too difficult.  The actual codon to amino-acid to protein coding could remain unaltered, at the start at least.

We would then have synthetic cells that might be able to reproduce much more quickly than natural ones, or work at much higher temperatures.

And the ladder DNA would be much easier to organise in two-dimensional sheets or three-dimensional blocks.  We could then try to do parallel copying of the DNA rather than the serial copying that happens at the moment - a ladder-DNA sheet could make a copy by stamping it out, rather as a printing press stamps out a page.  That should speed up reproduction even further, and a similar parallelisation could be attempted with the ribosome, making proteins all in one go, as opposed to chaining them together one amino acid at a time.

Life would get a lot faster...

Posted by Adrian Bowyer at 11:22 No comments: 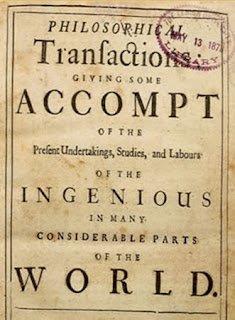 Science is mostly right because it assumes that it is wrong. All other fields of human thought are mostly wrong because they assume that they are right.

Despite this, scientific publishing is not organised scientifically at all; instead it relies on the antic combination of the political and the quasi-religious that is peer review.

Suppose some hapless junior academic in a fly-blown university physics department in Wyoming or Berkshire or somewhere has an explanation for why electron, muon or tau neutrinos change between these three types as they zip through you and everything else.  The physicist writes a paper about it that gets sent to a bunch of experts - the peer reviewers - who decide if it is sensible or not.  If they think it is sensible it gets published and the physicist stays in a job; if not, both it and the physicist are out on their ear.

That process is itself not sensible.

Since the start of the internet, I have not understood why we don't apply the scientific method to the publishing of science instead of relying upon the logical fallacy of argumentum ab auctoritate, which is what peer-review is.

Here's how it would work: authors post their paper online; at this stage there are no authors' names published, and the paper does not count as a publication to the physicist-sackers. It is assigned a prior probability of being right of, say, 10%. This probability rises automatically, but slowly, with time.

Then anyone except the authors can attempt to falsify the paper. At each failed attempt at falsification the probability of the paper's being right is increased in the appropriate Bayesian way. When that probability rises above, say, 70% the authors' names are published and they can use the paper to gain tenure, promotion, Nobel prizes and so on.

If an attempt at falsification succeeds then the paper is moved into a proved-false category and the authors may choose to have their names published, or not.

If no attempts are made to falsify the paper, and thus its time-dependent probability of being right rises to a high level all on its own, the paper is moved sideways into a maybe-interesting-but-not-falsifiable-so-not-science category. Any subsequent attempt at falsification (for example when technology improves) moves it back into the mainstream.

And what do the falsifiers get out of it? Their successful and unsuccessful falsifications are automatically added to their list of publications with a high rank – high, because falsehood is the only certainty in science.

Almost all of this could be automated by any competent web programmer.

Nullius in verba, as the Royal Society says.
Posted by Adrian Bowyer at 10:56 No comments: