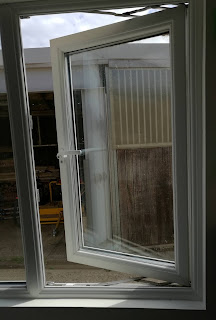 It is pretty easy to add a rectangular fly screen to a sash window.  But the problem with sash windows is that the maximum they can open is half, and the sash mechanism is less reliable than a simple (or complicated; see the picture...) hinge.

So how about an elastic concertina fly screen for a hinged window that folds away into the surround?  It has a magnetic strip like a fridge door that attaches it to the three opening sides of the window frame, and, as the window is opened, it un-concertinas (if that's a verb) to fill the gap.

When the window reaches a certain point (say open about 20 cm) the concertina is fully extended.  Then the magnetic strip pulls off the frame and folds itself away again into the surround using its stored elastic energy.

The magnet eventually re-attaches when the window is re-closed.

It should be simple to make, and could probably come as a retro-fit kit for existing windows, as well as being an option on new ones.

Posted by Adrian Bowyer at 10:25 No comments: