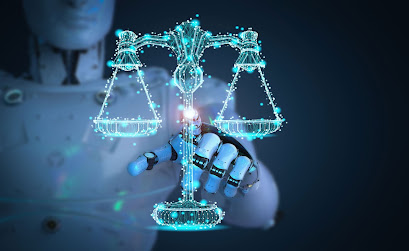 I am aware of the God-of-the-gaps nature of definitions of intelligence, whereby something that a computer becomes able to do successfully, like chess, is removed from the canon of intelligent ability.  By this process intelligence becomes a melting iceberg, drifting towards the Equator, with a smaller and smaller area upon which we humans may stand.

Despite that, I would like to propose a new definition of intelligence:

Intelligence is the ability to moderate impulses by deliberation.

By impulses I mean, in human terms, emotions.  But also, at a lower level, I mean such phenomena as a single-celled organism swimming up a chemical gradient towards food.

Let me start by considering systems that are entirely emotional and that do not deliberate: computers.  Consider what happens when you run a Google search.  The Google machine is completely unable to resist its impulse to respond.  If you were to ask it, "What is the best way to subvert the Google search engine?" it would return you a list of websites that would be its very best effort to answer your query correctly.  All computer systems, including all current AI systems, are entirely driven by their irresistible emotional need to respond to input.

If you type something at Generative Pre-trained Transformer 3 it will respond with coherent and rational text that may well be indistinguishable from human composition.  In that regard it is on its way to passing the Turing Test for intelligence.  But it cannot resist its emotional need to respond; the one thing you can guarantee is that, whatever you type at it, you will never get silence back.

But now suppose someone asked you, "What would be the best way for me to murder you?"  You would hesitate before answering and - if free to do so - not answer at all.  And under compulsion you would frame a considered lie.

Everything that responds to input or circumstances, from a thermostat, through a computer, a single-celled organism, to a rat, then a person, has an impulse to respond in a certain way.  But the more intelligent the responder, the more the response is mediated by prior thought and mental modelling of outcomes.  The degree of modification of the response depends both on the intensity of the immediate emotion with which the response starts, and the intelligent ability of the responder to model the situation internally and to consider alternatives to what the emotion is prompting them to do.  If you picked up a hot poker, the emotional impulse to drop it would be well-nigh impossible to resist.  But if someone held a gun to your head you would be able to grit your teeth and to retain your grip.  However, the single-celled organism swimming towards food would not be able to resist, no matter what danger lay ahead.

Today's AI systems are far cleverer than people in almost every specialised area in which they operate in just the same way that a mechanical digger is better than a person with a shovel. Computers are better than people at translating languages, playing Go or poker, or - of course - looking up information and references.  But we know that such systems are not intelligent in the way that we are with complete certainty once we see how they work; even a near-Turing-Test-passing program like GPT-3 is not thinking in the same way that we do because it cannot resist its impulse to do what it does.

We are not used to regarding the physics that drives computers to do exactly what they are programmed or taught to do as an emotion, but that is what it is.  If you see someone whom you find sexually attractive, you know it immediately, emotionally, and certainly; that is your computer-like response.  But what actions you take (if any) when prompted by that emotion are neither certain nor immutable.

Note that I am not saying that computers are deterministic and we are not.  Nor am I saying that we have "free will" and they do not, because "free-will" is a meaningless concept.  There is no reason to suppose that an AI system such as the current ones that work by machine learning could not be taught to moderate impulses in the same way that we do.

But so far that has not been done at all.

Finally, let me say that this idea makes evolutionary sense.  If our emotions were perfect guides to behaviour in all circumstances we would not need intelligence, nor even consciousness, with the considerable energy consumption that both of those require.  But both (using my definition of intelligence) are needed if an immediate emotional response to a situation is not always optimal and can be improved upon by thinking about it.

Nerve fibres conduct impulses at a speed of around 100 ms-1, which - in this age of gigabit light fibres - is a bit sluggish.

But we can now genetically engineer neurons to emit light when they fire, and to fire when light strikes them.  In addition light fibres are simple structures, consisting of two transparent concentric cylinders with different refractive indices. That is a lot simpler than a nerve's dendrite or axon (the nerve fibres that conduct impulses between nerve cells). We know that living organisms can make transparent materials of differing refractive indices (think about your eyes), and they excel at making tubular and cylindrical structures. Indeed plants and animals consist of little else.

So I propose genetically engineering neurons (nerve cells) that communicate optically rather than chemically. The synapses where transmitted signals from axons are received by dendrites as inputs to other neurons are small enough to transmit light instead of the neurotransmitter molecules that perform this function in natural neurons.  And light is easy to modulate chemically, so inhibitory neurotransmitters would just need to be more opaque, and excitatory ones would need to enhance transparency.  And, of course, it would be straightforward to create both inputs to, and outputs from, such a system using conventional light fibres, which would allow easy interface to electronics.

Doing this in a human brain might present a few challenges initially, so it would be best to start with a slightly simpler organism. Caenorhabditis elegans (in the picture above) is a small worm that has been extensively studied. So extensively, in fact, that we know how all 302 of its neurons are connected (that's for the hermaphrodite C. elegans; the male has 383 neurons, and we know how they're connected too).  We also know a great deal about the genetics of how the animal's nerve structure constructs itself.

Let's build a C. elegans with a brain that works at the speed of light... 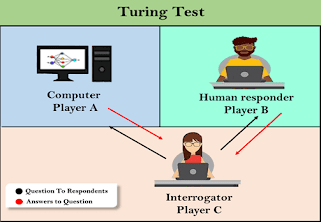 This is an edited version of a piece by me that appeared in the Communications of the Association for Computing Machinery, Vol 37, No 9 in 1994.
I recall asking my six-year-old, "How do you know that you are?" She considered the matter in silence for several minutes, occasionally drawing breath to say something and then thinking the better of it, whilst I conducted an internal battle against the Demon of False Pedagogy that was prompting me to make helpful suggestions. Eventually she smiled and said, "Because I can ask myself the question."
Even with the usual caveats about parental pride, I consider that this Cartesian answer was genuine evidence of intelligent thought. But she doesn't do that every day, or even every week. And no more do the rest of us. Intelligent thought is rare. That is why we value it.
The most important aspect of Turing's proposed test was his suggestion that it should go on for a long time. Speaking, reading, and writing are very low-bandwidth means of communication, and it may take hours or even days for a bright and original idea to emerge from them. We should also remember that there are many people with whom one could talk for the whole of their lives without hearing very much that was interesting or profound.
The distress caused to researchers from Joseph Weizenbaum himself onwards by the ease with which really dumb programs such as ELIZA can hold sensible (if short) conversations has always been rather amusing. The point is surely not that such programs are poor models of intelligence, but that most of us act like such programs most of the time — a relaxed conversation often consists of little more than a speaker's words firing off a couple of random associations in a listener's mind; the listener then transposes a few pronouns and other ideas about and speaks the result in turn. In speech we often don't bother to get our grammar right, either. ELIZA and her children mimic these processes rather well.
The researchers' distress arises because — in the main — they take a masculine view of conversation, namely that it is for communicating facts and ideas. But the most successful conversation-mimicking programs take a feminine view of conversation, namely that it is for engendering friendship and sympathy between the conversationalists (see, for example, You Just Don't Understand—Women and Men in Conversation by Deborah Tannen). Of these two equal aspects of conversation, the latter happens to turn out to be the easier to code. Of course the resulting programs don't really "feel" friendship and sympathy. But then, perhaps neither do counselors or analysts.
I suspect that a real Turing Test passing program will end up coloring moods by switching between lots of ELIZA and PARRY and RACTER processes in the foreground to keep the conversation afloat, while the deep-thought processes (which we haven't got a clue how to program yet) generate red-hot ideas at the rate of two per year in the background. What's more, I suspect that's more or less how most of us work too, and that if the deep bit is missing altogether in some people, the fact hardly registers in quotidian chatter.
Posted by Adrian Bowyer at 14:40 No comments: