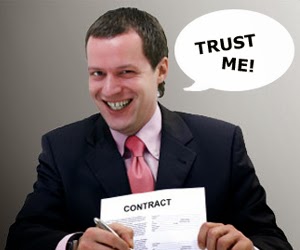 We now have good encrypted means of communication that allow people to talk with each other in complete confidentiality.  But can we be confident that the messages we are receiving are true?  Making a message secure and ensuring that it is not a lie are independent problems.  We have only solved the first.

I just saw Buzz Aldrin on the TV (run with me here...) and thought, "He seems pretty lively for an oldster."  So I got out my phone and asked it how old he is.

"Buzz Aldrin is 85 years old," it said to me.  I am reasonably sure that it wasn't lying, and - if I were to go online - I could find multiple independent sources that would allow me to confirm his age.  Their independence assures me that 85 is almost certainly the correct answer.  It would require a conspiracy of Kennedy-was-assasinated-by-NASA-during-the-moon-landing proportions to think that all those sources of information had been got at and that I had been lied to.

And the answer 85 was given to me by a machine that understood my question.  No human being (apart from me) was involved.

So how about an online document checker that scans texts and tells you how likely they are to be true?    It would use the multiple-independent-sources technique to work up a score.  It could give you an overall statistic ("This is probably correct at a level of 93%."), and it could rate individual statements for both accuracy and uncertainly.

Thus if my document said:

I'd get a correctness level of around 50% and an uncertainty level of around 30%.  (The first two statements are true and the third is false.  But the system would obviously have much more trouble verifying the middle statement than the other two.)

Your document would come back coloured:

The system could crawl the web, paying particular attention to advertising copy, political manifestos, and estate agents' property descriptions.  Then - if you selected the TRUTH option in your browser - whenever you visited a website it would be pre-coloured for you so you could see if it was all lies...