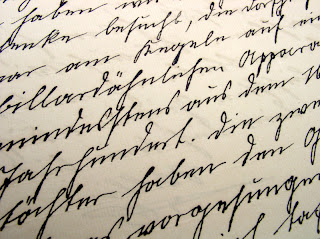 Does people's handwriting look like their parent's handwriting?  It must have a genetic component - after all the muscles and the nervous system driving them were built by the genes.  But it is clearly also cultural - a European orphan raised by Japanese adoptive parents would learn to write Kanji not Roman letters.

This raises another question: can handwriting be characterised by geometric measures that are invariant when the language and the alphabet being written change?  The sharpness of angles; the aspect ratios of characters or pictogrms, slants, the circularity of curves and so on.

Given such a characterisation system, a classic heritability study could easily be done between separately-raised identical twins, and adoptive and biological children to find how much of the way we write is fixed.

Of course, hardly anyone writes anything longhand any more.  We should hurry to do the study before handwriting dies out alltogether...

Posted by Adrian Bowyer at 12:55 No comments: 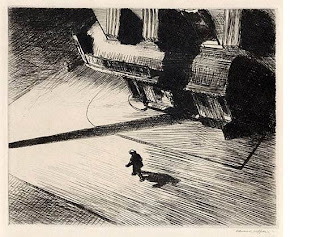 A street, vertically above which is suspended a computer projector projecting a plain white rectangle onto the pavement.  Beside the projector is a TV camera connected to the same computer.   The computer is analysing the shapes as people walk into view.

It generates a fake shadow for them from the projector, darkening the area of pavement where an imaginary light source to one side would cast a real shadow.  The shadows follow the people apparently casting them just as real shadows would.

But a shadow then detaches from its caster and does a little dance.

Two people's shadows walk away from their casters, shake hands, and then go on each to become the shadow of the other caster.

Two people's shadows pause as their casters walk on, hesitate, then kiss passionately.

One person's shadow detaches and creeps up menacingly behind another person.

A shadow acquires the profile of a famous person.

Suddenly, everyone has an umbrella. 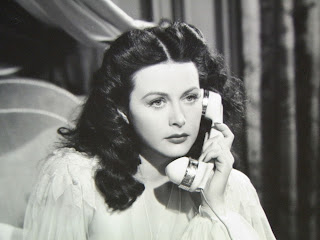 One of the big sweeps is unquestionably the mobile phone.  Anyone over the age of thirty can remember a world without it, but for all of us that world seems impossibly distant and unconnected, both with itself, and with us.

The frequency-shift communication that makes mobile phones possible was famously invented by Hedy Lamarr.  Indeed, it is an interesting aspect of fame that her invention will probably turn out to be the one by which future ages will remember her.  Anyone in the 1940s would have been flabbergasted if they could have known that back then.  To them it would be as if a time traveler from 2500 were to tell us that Einstein will be principally famous for his haircut.  (Hedy Lamarr was called "The Most Beautiful Woman in Film"  by her biographer Ruth Barton; form your own judgement from the picture.)

Now all over the world dictators are beginning to tremble as ordinary people take an instrument they use for chatting, and with it scythe off trigger-happy riot squads at the knees with the deadlier weapon of documentary exposure.

But the weak point in the system is the service providers and their base stations.  The base stations are too vulnerable to being turned off by those dictators, and the companies succumb to injunctions to surrender up call records and the like.

However, now that we have open phones that we can program ourselves, those service providers and base stations should become redundant.  That is because every mobile phone can be a base station for others nearby.  If I make a call it would hop from phone to phone across the city, then maybe dive down a wi-fi connection a few miles away to emerge at another on a different continent and then to go hopping on to my interlocutor.  The nice thing about this scheme is that the bandwidth of such a system is proportional to the number of phones in a locality.  (To be pedantic, the bandwidth is proportional to the square-root of the density of phones in the locality.)  Just where you need a lot of bandwidth, there are a lot of phones.

There is a problem.  To preserve your battery, your optimal strategy is to be a parasite - to use the open network, but selfishly not to forward the links needed by others.  But this is easily remedied: the software in the other's phones simply tests your phone to see if it is programmed like that and - if it is - other phones don't give you your calls.  That way everyone is rewarded if they add their bit to the commonwealth.

The system could be fully protected using hard encryption, with friends Diffie–Hellman-swapping their public keys just as for encrypted e-mail.  No one in the middle could listen in.

And then what would we have?  We'd have a completely free universal phone system that no company or government could shut down, and in which anonymity and untraceability would be preserved.  All you would have to buy would be the phone and electricity needed to charge its battery.
Posted by Adrian Bowyer at 00:00 8 comments: 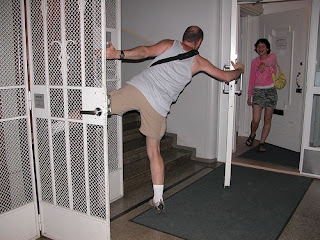 When you walk down a corridor and someone is behind you, it is obviously polite to hold any doors you encounter open for them.  They arrive at the door, put their hand on it to hold it open, and you walk on while they walk through.  If they too are polite they will say, "Thanks."

But if it is a long corridor with many doors, you will find yourself holding each and all of them for your follower.  After about three doors this becomes a slight embarrassment to you both.  Your follower will grin at you sheepishly and make I-am-hurrying-up gestures  as they approach.  You will smile back with a slight air of condescension.

It would make a bit more sense to swap: you hold Door 1 for them while they walk through, they (now ahead) hold Door 2 for you while you walk through that, and so on.  For some reason we never do this.  Maybe it is because the follower feels that - if they were to walk ahead - they would be usurping your leader's position, and that that would be presumptuous.   This is despite the fact that the swapping scheme would allow them to return your favour at the next door - immediate reciprocal altruism.

Game theoretically, of course, the Nash equilibrium is the selfish let-the-door-go-in-the-follower's-face strategy; the equivalent of defaulting in Prisoner's Dilemma.  But - as we all know - people don't behave like the individual self-interested rational actors of naive game theory because our utility function is not individual advantage, it is the advantage of the genes that we both carry and share with others.
Posted by Adrian Bowyer at 15:06 No comments: 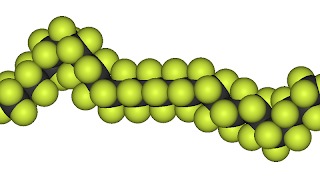 Chemists are a species of German: when they have something new to name they take all the names of its component parts and string them together.  This is an admirably reductionist approach, but the result is usually something like polytetrafluoroethylene.   If I am reading out loud I have to take a run-up to stand a chance of pronouncing this sort of thing, and I suspect that others - even chemists - have to do so as well.

This is a problem that the computer scientists have attacked and solved.   They are under the constraint that the parsing rules of computer languages don't usually allow them to put spaces in names.   So, if they have a multi-component name, they have somehow to chain it together.  One solution is to use the underscore character, so, for example, a garbage collector heap pointer gets named garbage_collector_heap_pointer.   The other, and more elegant, solution is this: again like the Germans, they use capital letters judiciously; but they don't just put them at the start; they distribute them throughout the name to make its components stand out.  GarbageCollectorHeapPointer is as easy to read and to pronounce as garbage collector heap pointer (though I'll allow it does somehow seem to be in a hurry...)

This is the lesson the chemists need to learn.  Anyone can say  PolyTetraFluoroEthylene on the fly as they encounter it on the page.


PolyTetraFluoroEthylene itself (shown above) is remarkable stuff.  It has this structure:

The fluorine atoms bind so strongly to the carbon that the resulting plastic will easily handle temperatures of 250oC without breaking down.  It also has one of the lowest friction coefficients of any solid substance, and these two characteristics make it an invaluable material throughout the whole of engineering.  Just about the least interesting use of it is the one everyone has heard of: non-stick frying pans.

Another polymer with similar temperature stability is PolyDiMethylSiloxane: 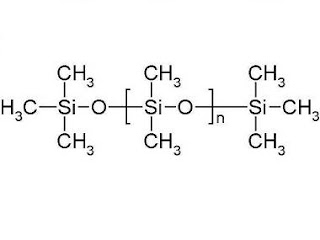 But this acts like a rubber - it is incredibly elastic and makes moulds that are so good that they will reproduce features down below the wavelength of light.  Again, PolyDiMethylSiloxane is one of the most useful of all engineering polymers.  And also again, its least interesting use is the one everyone sees: bathroom sealant.

As far as I know, nobody has ever tried to combine these two ideas to make this stuff: 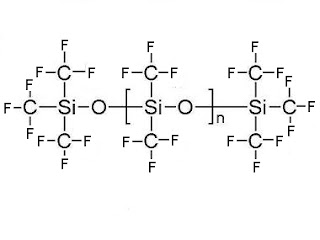 which, I conjecture, ought to have a considerable number of useful and interesting properties.

I call it PolyDiFluoroMethylSiloxane.
Posted by Adrian Bowyer at 11:06 No comments: