Beekeeping is a three-way symbiotic mutualism.  The plants get pollinated by the bees, the bees get fed from the plants' nectar (and get extra nectar for their nest), and we get some of the extra nectar as honey and also get our crops pollinated.  We contribute the tilled land for the crops, the beehives, and medical care for both the plants and the bees.  All round, a very satisfactory Darwinian arrangement for the three parties.

But only one of those three parties is smart enough to understand how the whole thing works, and to use that understanding deliberately to enhance or to copy the mutualism.  That would be us.

We all know that leafcutter ants from the two genera Atta and Acromyrmex use the leaf-parts that they gather to farm fungi in their nests for food.  Given the rich social-insect resources of bees and ants, it ought to be possible  to genetically-engineer a species that farms out in the open.   That is, a species that would plant a crop, tend it, sting other species who would eat it, then harvest it concentrating it in one place.  We, once again, would provide the cleared land, the nest boxes, and the Medicaid.

We could then use the oil in the place of petroleum.  Carbon neutral, future-proof, and entirely solar powered, the oil would simply drain from the insects' nests down a network of plastic pipes to the processing factory, leaving some behind to fuel the insects in their toil... 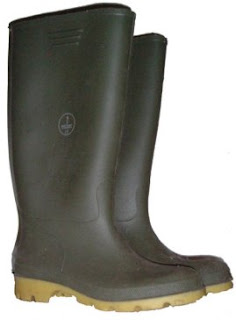 Wellington boots are really indispensable.  They turn even the most timid city-dweller into an all-terrain vehicle.  But they are bulky and - if worn for a long time in hot weather - sweaty.  Also, they are not as comfortable to wear as shoes, particularly for extended walks.

Galoshes - that is foot-shaped plastic bags that go over ordinary shoes - go part-way to solving the problem.  You can deploy them just when you have to ford a stream, and wear comfortable shoes for the drier parts of your journey.   But they are not so good for riding horses or climbing - things that can be done in wellies (they have heels, which you need for riding).

So how about inflatable wellies?  These would be much lighter than conventional wellies, and - when emptied of air - would roll up and fit in your pocket.  But if you blew them up they would aquire sprung thick soles, and reasonably stiff calf-gripping sides.  A highly fluoridated outer polymer surface could make them very non-stick, so they could easily be rinsed off before rolling up and putting away.

And if the stream being forded turned out to be a little deeper than expected, they would make an excellent buoyancy aid, though at the wrong end until taken off and slung round your neck...
Posted by Adrian Bowyer at 15:59 No comments: 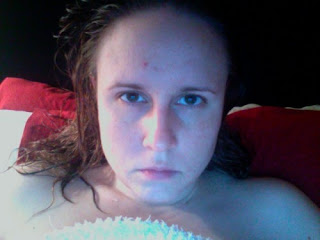 When our friends are ill, we often know it just by looking at them for an instant.  The lineaments of disease are writ on their physiognomy, and good doctors must become adept at making provisional diagnoses as soon as their patients walk through the door (assuming they are up to walking).


Now.  There are a lot of dead people - their number is increasing all the time; and they all died of something.  In the last century or so, almost all of them will have been photographed as well, and many will have been photographed towards the ends of their lives.  It should be straightforward to establish a truly vast database of late (in both senses) portraits linked to causes of death.  If all the portraits for each cause were then to be averaged, we'd have a typical face for pancreatic cancer, and another for a dissecting aortic aneurysm, and so on.  Non-lethal conditions could also be catalogued in the same way.


A website could then be established to which people feeling poorly could upload their picture from their webcam.  The picture would be compared with the database, and back would come the ten most likely diagnoses, in order of probability.


It would be hypochondriac heaven.

It would also automatically become more accurate with time.  This has nothing to to with the adding of extra data (though that would happen too), but is a specific instance of the general rule that people who exhibit text-book symptoms for a disease have a higher Darwinian fitness than those who don't.  They are more likely to get the right treatment, and in turn are then more likely to survive and to reproduce, passing on their text-book-symptom tendency to their children.  By this means, medical text books also become automatically more accurate with time, even if neither a word nor a picture in them changes.


It would be interesting to test this idea by adding an arbitrary unconnected symptom to a disease in medical training - say that diverticulitis often causes a slight rash along the hairline above the ears.  At the start, the correlation between rash and inflamed diverticula would be no better than random.  But as time went on, and the people exhibiting the rash lived to have more children, the initially nonsensical symptom would become a real one with diagnostic power.

In fact, it may be that many symptoms that you and I exhibit when we are ill have already been established in this way, dating right back to the preposterous diagnoses of pre-scientific physicians in the eighteenth century and before.   The evolutionary mechanism just described will have made them self-fulfilling prophecies.

All this assumes that treatments are effective, even if the diagnoses start off being based on random rubbish.  But, of course, the same evolutionary pressure will work on random treatments too.  So a witch doctor diagnosing demonic possession for what is, in reality, porphyria, and prescribing a course of viper venom is applying a selection pressure on the unfortunate patient to get cured by viper venom.  The first diagnosis and treatment will work no better than chance, but persistence and consistency will make viper venom a cure for porphyria in the long run.

Could this be the basis for much of medicine?  It doesn't matter what the diagnosis and corresponding treatment are at the start.  As long as they are applied consistently and over many generations, they will come to work effectively as the patients evolve to match them.

Posted by Adrian Bowyer at 23:10 No comments: 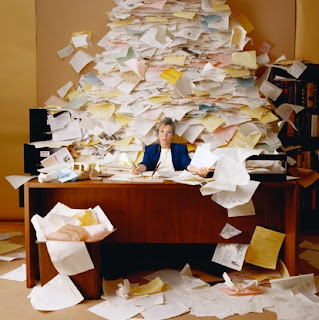 Here you are reading a blog.  So, as a user of this new-fangled World Wide Web thing, the chances are that you also, like me, get far too much e-mail.

I don't just mean the tired old stuff asking please could I deposit $10,000,000,000,000,000 from my uncle in the Libyan Government in your bank account for a bit, or how I made $1,000 per hour with a can't-fail scheme that anyone can follow from the comfort of their home.  Those are instant-delete, and actually don't take up too much effort.

The worst e-mails are genuine ones asking you to do something time-consuming with possibly some small benefit to yourself.  You are a busy man or woman.  You have your own projects.  But these at least deserve the courtesy of a polite and (briefly) considered reply.  You make a start on them, and there is half a day of your life gone, never to be seen again.

There are many automatic e-mail filters and prioritizers out there, but I would like to propose a new one:

Sort e-mails by the average time you took to respond to the sender in the past, with the shortest times at the top.

Your e-mail system would then learn the people to whom you like to reply quickly, and put their e-mails at the head of your queue.  It would be simple for the e-mail system to calculate, and it could even be set up retrospectively by having the software run through your existing Sent mailbox compiling the initial set of averages.

Simple, self-modifying, and useful, it would adapt as you worked.  And you could just go down through the top few every day and then stop, confident that you have answered the e-mails most important to you.
Posted by Adrian Bowyer at 16:47 3 comments: