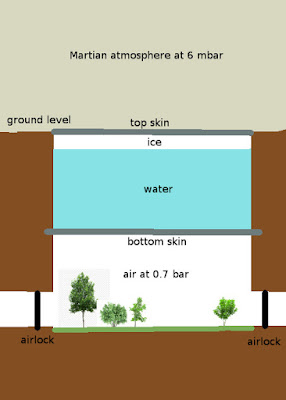 I prompted a bit of a discussion on Twitter the other day by asking, "How deep a hole would you have to dig on Mars for the atmospheric pressure at the bottom to be 1 bar?"

1 bar is 1 Earth atmosphere, for non-metric people.  It turns out that the answer is 55 Km deep, which is rather inconvenient if you want to use this as a way to produce comfortable human living space...

But, as SCUBA divers know, every 10m deep you dive in water increases the pressure by 1 bar.  So how can we live on Mars under water?  We'll need a copious supply of water anyway that we would recycle, and the diagram above gives a rough idea how we could use that both to pressurise the living space and to create a radiation shield.

On Mars the 1 bar water depth would be at about 28m, because of the lower gravity.  But, if we were prepared to have a lower air pressure, that depth could be reduced to 20m.  (That would give the same pressure as the inside of a cruising airliner cabin - about 0.7 bar.)

So we dig a circular hole about 35m deep and about 40m in diameter.  We line and seal the walls to make them air and water tight.  Then we put in a transparent skin that forms the bottom of a water tank about 15m from the floor, and another skin at ground level.  We fill between the skins with water, while raising the air pressure under the bottom skin to balance the load.

When the structure is complete the water would be supported by the higher air pressure underneath.

The water would freeze at the top because of the Martian surface temperature.  The top skin is needed to keep the water/ice dust-free and to prevent loss by sublimation.  For safety, the bottom skin under the water would probably have to be made strong enough to survive both a loss of atmospheric pressure underneath it, and a loss of the water above it.  Alternatively, almost all the water could be allowed to freeze.  Then it would become a strong part of the structure, especially if it were mixed with transparent fibres with the same refractive index as ice.

As anyone who has dived in clear tropical waters knows, plenty of sunlight would be available in the living area at the bottom.  And water is an excellent radiation shield, so, together with the surrounding ground, the problem of Martian surface radiation would be eliminated.  If care was taken to control the freezing of the top layer of water to eliminate bubbles, it may even be possible to make the water roof optically clear, so the Martian settlers could see the sky. 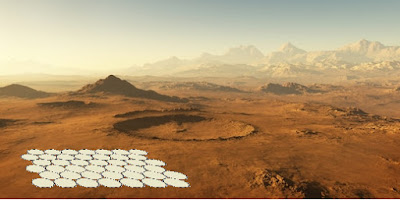 Digging a cylindrical hole using a descending circular shield and lining the walls above the shield with a resin/rock-dust composite is a job eminently suitable for a robot.  It could work away for years before people arrived, preparing a hexagonal grid of living cylinders interconnected by short corridors at the bottom.  Another robot would be ferrying ice from the Martian poles to the site.  When people landed they could do the more fiddly job of fitting the skins and airlocks, gradually expanding to occupy more cylinders as needed.

In order to get all this working, we'd obviously have to try it out on Earth first.  Maybe we should do so at Coober Pedy in the Australian outback.  People there already live in artificial underground caves because of the heat.

And the whole project might run at a profit because of the Coober Pedy opals the robot dug up...
Posted by Adrian Bowyer at 14:10