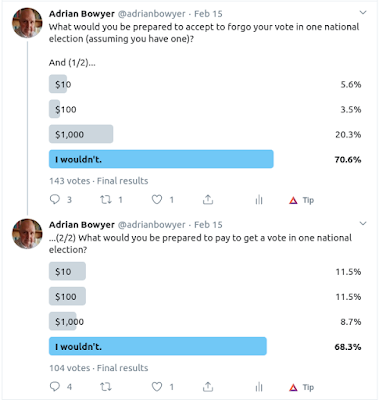 Today, a poorly-researched and highly dodgy cost-benefit analysis of democracy.

First, let me say that, as a way of making decisions that affect large numbers of people's lives, cost benefit analyses are at best morally questionable and at worst actively bad.  That is opposed to, for example, one person making a cost benefit analysis of something that will only affect them (rather like Darwin's list on whether or not to marry; Emma Wedgwood, of course, was free to turn him down).  That seems to me to be an entirely legitimate way to make a decision, if a little cold.

But what is cost-benefit analysis?

Suppose some project is proposed that will affect many people, some positively and some negatively.  The project might be building a new hospital that will require an ancient woodland to be felled.  A cost benefit analyst will go out and ask the people one or more of four questions:


Questions 1 and 3 are known as willingness-to-pay questions, and Questions 2 and 4 are known as willingness-to-accept questions.  The analyst would add up people's answers and use the result to decide what it was that the people really wanted.  Note that the people aren't actually going to have to stump up the money they've offered, nor to get the money they've requested; cost-benefit analysis is just a way of getting a measure of how people think about something.  Of course both the wording and the order of the questions will almost always affect the results.

Why is all this morally questionable or outright bad?

Let's start with willingness-to-pay.  Suppose you are a rich environmentalist who can afford private health care.  In answer to Question 3 you may say, "I'll pay $1 million to keep the wood."  Your answer will shift the average a great deal, and will swamp the answers of the many poor people who answered $10 to Question 1 because they want the hospital built.  Willingness-to-pay is the exact equivalent of letting people buy votes, something that only the most swivel-eyed libertarian might propose.  It leads directly to gross inequality in influence, and indirectly to inequality in accumulated resources.

Is willingness-to-accept better?  Suppose you are a poor environmentalist who is passionate about the wood.  In answer to Question 4 you may say, "Pay me $1 trillion to cut the wood down."  Once again your answer gives you disproportionate influence.  Willingness-to-accept effectively gives everyone a veto over anything they don't like, as they all bid up the cash they demand to numbers requiring exponential notation just to write down.  It would mean that nothing with any opposition at all (no matter how irrational or ill-informed) would ever get done.

So, having established that it's rubbish, let's use cost-benefit analysis to decide if we should pay for democracy.

As you can see, the results are superficially completely irrational.  Most respondents wouldn't even be prepared to accept $1,000 to give up their vote.  Given that, you'd logically expect the same people, no matter how poor they were, to be prepared to pay at least $10 to get a vote.

But what's actually happening is more profound.  Offered both choices the majority are saying, "I'm not even going to play this game."  They presumably regard a vote as a right (as do I), and so they think its provision is outside the sordid realms of monetary transaction.  In short, they think the very questions are implicitly category errors.

However, I am quite intrigued by the one-in-five people who would be prepared to sell their right to vote for $1,000 and the one-in-five (possibly different) people who would pay up to $100 to get a vote.  So I suppose that I had better finish with how I would answer: I too wouldn't play the game; I'd campaign for monetary reward or cost for votes to be removed from the system.

But, to actually answer the questions, my willingness-to-pay for a vote is entirely dependent on geography.  I live in a safe parliamentary seat, so I know in advance that the probability of my vote either way altering the result is vanishingly small.  Thus the opportunity cost of my paying for a vote is such that I know that I could archive far more for others (and maybe myself) by giving the vote's cost to charity instead, which is what I would do.  If I lived in a marginal seat that could go either way with just 100 votes that argument would change completely, and I'd probably pay around $100 for a vote.  If I were asked for much more than that, the charity argument would still win.

My willingness to accept payment to give up my vote would work in the same way.  If I could do more for others and myself with the money I was payed than the expected good that would come from casting my vote, I'd take the money and do the good.

I am a lapsed utilitarian.