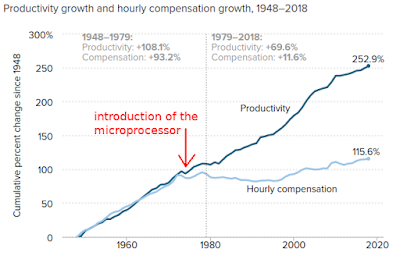 You don't have to imagine that world; you're living in it.

The famous graph of productivity and wages above from the Economic Policy Institute (with the red arrow added by me) shows what's happened.  As I've pointed out before, the engine of history is engines.  Automation is the reason for the decoupling of productivity and wages, and automation really took off with the introduction of the microprocessor in the mid 1970s.  As more wealth is created without any human effort, the value of - and hence the wage for - human effort falls.

Suppose someone has a one-person business idea that causes a few of the coffee pourers voluntarily to pay them $1 for the useful product of the business.  Then suppose the microprocessor communications network that spans the World allows that business to expand without requiring the business to employ many people, or - in the extreme - not to employ anybody beyond its originator.  Now two billion coffee pourers are paying in their $1, and suddenly we have a billionaire who has achieved that status without exploiting anyone: they haven't employed anyone, and all their customers are volunteers.

And, of course, for much of this the coffee pourers don't even need to pay $1.  The business gives them what they want free, and sells the pourers' personal details to advertisers.  As the cliché has it: if you get it for free YOU are the product. The implication here is that somehow this too is exploitation, but I think that stretches the idea beyond breaking point: I am hardly being sweated as indentured labour if that labour merely consists of scrolling down my search screen to the first link that doesn't have "Ad-" in front of it...

Another aspect of the graph above that is not often discussed is that it is one of the main reasons for very low inflation in recent decades (see "Disruptive Technology" here).  After the crash of 2008, developed nations' governments started printing cash like there was no tomorrow to rescue the banks - the euphemism was, and is, quantitative easing.  Setting aside whether this was right or wrong, or sensible or stupid, in previous ages it would have led to rampant inflation.  But this time it didn't.  And the reason it didn't is that our machines carried right on up the top curve making more and more wealth with fewer and fewer people, keeping wages flat.

Some say that the recent phenomenon of wages lagging behind productivity is caused by neoliberal economic policy. But neoliberalism didn't cause the microprocessor revolution, it didn't cause the resulting growth in wealth, and it didn't cause the resulting loss in the value of work; it merely didn't force the redistribution of that wealth.  In this regard it is simply a word for inaction; doing nothing under a different political label would have led to the same result.  Neoliberalism didn't make the wealth or the problem; it merely did nothing to correct it.  And if neoliberalism claims the growth in productivity, it is the fly on the chariot axle saying, "See what a dust I raise!"

Forming a union to protect employees' rights, which is what led the curves in the graph to match up until the 1970s, only works if the business the union is negotiating with needs a lot of employees to function. If the business employs few people, collective bargaining simply doesn't work. And if it employs none, the whole idea is obviously completely inapplicable - you can't have a collective of zero people.

The hundred-and-fifty year-old Marxist idea that the labouring proletariat make wealth for capitalists, but can't benefit from that wealth themselves unless they unite to form a cartel to drive up wages or to force themselves into a controlling position has no application if the capitalists don't need a labouring proletariat to make money.  You can't have a strike of people who are already sitting on a sofa watching Netflix in the daytime.  And if they're pouring coffee for other coffee pourers, then any strike is necessarily misdirected.  Their exploiter isn't really Starbucks, nor is it Ford, who take a chunk of their coffee-pouring wages for a car that needed virtually nobody to work at its manufacture.  They don't have an exploiter; they are just not worth very much economically at all.  If someone finds that their circumstances are impoverished it doesn't necessarily follow that someone else is being actively unfair towards them.

Here are a series of steps. But in reality all of the following transitions took time to happen; the changes have been a smooth exponential that started in prehistory and is continuing to rise up ... well, exponentially.  Remember that wherever you are on an exponential curve there is a plain behind you and a cliff ahead.

12,000 years ago the invention of agriculture meant that the economic value of hunter-gathering dropped, so hunter-gatherers started to labour on the land. In absolute terms they became better off. But in relative terms they were worse off than the owners of the land.

250 years ago the Industrial Revolution mechanised both agriculture and production, which meant that the value of working the land dropped, so agricultural workers started to labour in factories. In absolute terms they became better off. But in relative terms they were worse off than the owners of the factories.

20 years ago microprocessors expanded into into the communications and service industries.  AI started to do work that previously only people could do like answering phones, writing legal documents, or diagnosing diseases.  This meant that the value of working in service industries dropped.

And now the workers have no economic sector that values their work to migrate to.

Alphabet (Google's parent company) is the fifth biggest company in the World.  It has 135,000 employees...

We haven't evolved to work.  Most people don't like working.  Work is not needed for social interaction.  People in wealthy societies spend nearly half their lives not working because they're in education, then in retirement.  There is nothing inevitable about work.

And increasingly there is nothing necessary about work either - see the productivity graph above.

Here is another graph.  It's of happiness against age from a study of about 1.2 million people by the economist Danny Blanchflower.  The Y axis is a measure of happiness. 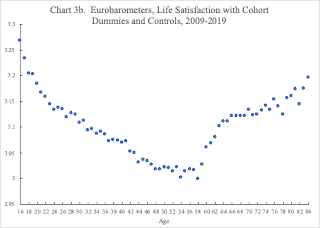 What it shows is that work contributes to making people miserable and retirement (look at the steepest up gradient...) makes people happy.

Every retired person I know (and I am of that age, so I know a few) is busier and happier in retirement than they were when they were working.  The happiness is perhaps unsurprising, but why are we all so busy?  The answer is that we are all doing unpaid hobbies - things that we would have done for work when younger if only they had paid enough.  (To be fair, I was one of the tiny minority of incredibly fortunate people who had a paying job that was more or less my hobby - I was a university lecturer and researcher.)

My pension, and the pensions of pretty much everyone who has one, is paid for out of company dividends from shares owned by pension funds.  Having bought shares in the companies that are following the top curve in the graph at the head of this essay, pensioners have detached themselves from the bottom curve.

Clearly what is needed is a mechanism to extend the idea of a pension to everyone from the start of their adult life onward, as their work is increasingly unneeded and so increasingly can't produce wages to support them.  In other words, we need a UBI, a Universal Basic Income.

The economic and political solution to this that is usually proposed is a reasonable one: tax the profits of the companies on the top curve and use the money to pay a UBI of - let's say - $25,000 a year to the people on the bottom one.

But I would like to propose an alternative that might work better: allow companies to pay some of their tax bill in shares.  The dividends from those shares would then be used to pay the UBI, just like a pension.  Governments would have to appoint independent pension fund managers to look after the scheme, just as pensions are now administered.  And there would have to be some strict rules in place to prevent skulduggery like governments selling shares when they needed a bit of cash, or like companies paying shares as tax that they knew for some reason were going to give poor dividends relative to the company's performance.

Work used to give most people a reasonable standard of living.

The only way to correct this is with a Universal Basic Income funded by companies' increased profitability from automation.

I wrote this without being paid for it; it is one of my hobbies.

But this could have been written by the GPT3 AI...

Intriguing, thought I wouldn't trust the corps not to mess with their share prices at tax time.

They always find a way around the rules

Rules are a lot weaker than economics.

Very interesting topic and a good analysis. I totally agree that we need UBI and that it is net positive for society, especially as automation and AI grows.

Most people don't realize how much better off they are because of the media bias that makes you feel everything is worse even though the opposite is more accurate. However, the extremely low corporate tax for largest corporations and tax havens are only increasing inequality. The revenues from capital are exceeding the revenues from labour, further worsening inequality.

One of the problems driving this is that we see the economy through the lens of the GDP. Originally a yardstick, but increasing a target. A metric that becomes a goal ceases to be a good metric. Moreover, anything that isn't part of the GDP is formally not contributing to the economy. Of course that doesn't mean it's not valuable. This means that a lot of policies are based on the wrong metric that is no longer a good measure for wealth.
With universal basis income, no one should be against it because it basically pays for itself. This is because government can be simplified and many programs that are ineffective can be sunset as UBI is phased in. If everyone gets UBI, this is like the "venture capital" for all citizens. This way everyone can afford to take risks, creating opportunity for everyone. Right now this is reserved to just those who have the luxury of a financial buffer, which means many good ideas don't come to fruition.

The biggest problem of poverty is that it's a trap. How you start out is way to important a predictor to determine your outcome. Wealth allows you to build more wealth, so the gap widens.